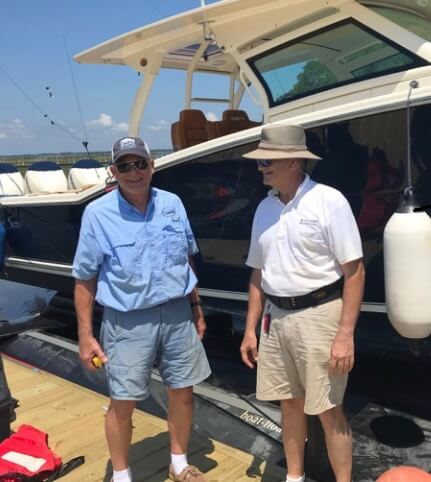 A retired Navy Captain, Jerry is our resident engineer who takes detail to an entirely new level. His native language is mathematical formulae and this man can create a spreadsheet unlike anything you ever imagined. Upon joining our team, Jerry streamlined the process of creating detailed material lists for our HDPE structures — what used to take several days to compute now takes mere minutes. You can throw a knotted up ball of data at Jerry and he’ll be able to organize it and present it in a way that even a kindergartner could understand. When he’s done crunching numbers for the day, you can find Jerry on Itsula, his 44′ Carver.

With 80 years of living under his belt, this lifelong mariner and career engineer is the reason our DryDock lift exists. Chuck has categorically never found a problem that can’t be solved. And when others on our team are timid and nervous, Chuck challenges us all to press ahead to find the solution that always reveals itself. Chuck built the very first DryDock for himself because he was disgusted everybody else kept telling him, “It can’t be done.” He’s been threatening to retire — again — ever since we partnered with him, but he won’t (and we couldn’t be happier!). Away from us, Chuck is either out on MOTHERShip, his custom inboard boat, or sailing an e-scow.

Celebrating Life And Helping Protect Any Boat, Anywhere! From Runabouts To Huge Offshore Beasts, We Can Protect Them ALL.